Animal testing is not only a very cruel but also a not very reliable way of verifying the safety and quality of products. It is estimated that 500,000 mice, guinea pigs, rats, rabbits suffer, small species of pigs, dogs and cats and die in these tests every year throughout the world. 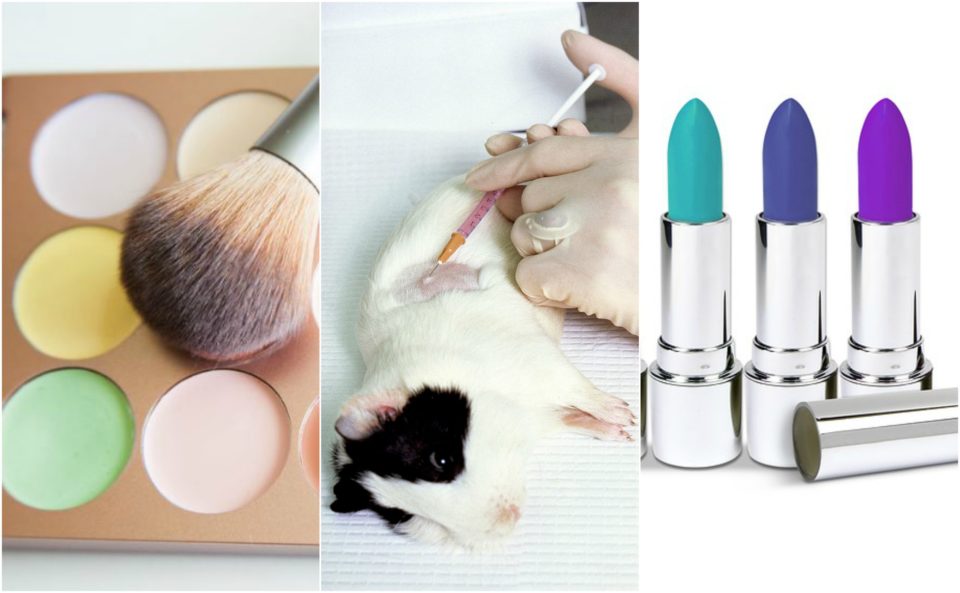 These animals are given chemicals in the eyes, on the skin, are forced to swallow or inhale them. Animals undergo this torment only to give consumers a choice of a huge range of new products.

It is also known as Draiz’s eye test and is used to determine the acute irritation of a substance when applied directly to the eye. Usually at least three adult rabbits are used to test one substance. Each rabbit is immobilized and conscious to apply the substance is to the eye, while the other eye serves as a control one.

The rabbit’s eye produces much less tears than the human eye and therefore cannot wash away the substance – this is one of the reasons why this kind of animal is used. Rabbits do not have a blink reflex, which facilitates the application of chemicals. During the test, the eye becomes cloudy, flushed and eyelid swollen. Visible ulcers and eye fluid are described 21 days after a single dose.

This test is used to determine the aggressiveness of a substance applied to the skin. At least three adult rabbits or guinea pigs are used to test one substance. The test requires application of the test substance to their shaved skin. After hours, days or weeks, there will be signs of redness, swelling, inflammation, skin cracking and ulceration.

The acute toxicity test determines the toxic effect of a substance on the whole organism after a single dose. Usually, 15-30 rats are used to test one substance. This is administered orally, by injection or by inhalation. The animals are then observed for several days and any signs of poisoning are recorded. Symptoms include changes in blood pressure, weight loss, excessive salivation, damage to internal organs, internal bleeding, breathing disorders, convulsions, bleeding from the eyes, nose or rectum, bristling of hair, tremor, diarrhea and coma. It is no exception that animals die during the test. At the end of the experiment, all surviving animals are sacrificed for necropsy.

The aim of this test is to detect possible negative effects of substances on the developing fetus. Pregnant females are dosed with the test substance for 10 days, after which the animals are sacrificed and the fetus removed. Subsequently, changes related to fetal reproduction and development are evaluated.

Lethal Dose 50% means “half the lethal dose” and is called one of the cruelest tests performed on various animal species including cats and dogs. The aim is to determine the amount of half-causing substance to test the animals used.

Different groups of animals of the same species are treated successively with different doses of one substance until the amount of the substance is found, at which half of the individuals in the group die. Very often, the conclusions drawn for humans based on this test are inconsistent with the fact that the cross-species differences in absorption, metabolism and excretion are significant.

Phototoxicity and photosensitization are skin reactions to chemicals that occur under the action of light. Small pigs, mice, rats and rabbits are commonly used in phototoxicity tests, but the observed skin reactions are often quite quantitatively and qualitatively quite different from comparable human skin reactions.

Usually, no painkillers are administered to the animals during testing.

China is an increasingly interesting market for many American and European cosmetics brands. Last year alone, the cosmetics market in China was worth over 26 billion.

Chinese law requires mandatory animal testing for all cosmetics products manufactured outside China. This means that all the big American and European cosmetics brands are currently sold in China, must undergo animal testing.

Some of these big brands include MAC, Clinique, and even Benefit. Animal testing law does not apply to online shopping. It only applies to products that are physically sold in the country.

Big Corporations Who Test on Animals

Cosmetic animal testing is banned in the European Union, India, Israel, and Norway.

We all have a choice between animal-tested products and those that have been tested differently or contain only animal-tested ingredients in the past (the company does not support new tests). Our decision can help stop animal suffering.