The ocean is full of creatures that most people do not know. Scientists from the National Institute of Water and Atmospheric Research (NIWA) have made the rare discovery of a days-old ghost shark in deep waters off the coast of New Zealand. This newly hatched deep water shark was collected at a depth of approximately 1200m on the Chatham Rise. Ghost sharks (Also known as chimaeras) are cartilaginous relatives of sharks and rays. Because they live very deep in the sea, watching them is very rare.

Very little is known about the lives of many deep-sea creatures. This is a beautiful demonstration that the ocean is full of mysteries waiting to be explored. It is very rare to see an adult and even rarer to observe a young ghost shark. Their embryos develop in egg capsules laid on the sea floor, feeding off a yolk until they are ready to hatch. The discovery was published directly on the NIWA website.

NIWA Fisheries Scientist Dr Brit Finucci was part of the team that made the discovery and says it is a very rare and exciting find:

“You can tell this ghost shark recently hatched because it has a full belly of egg yolk. It’s quite astonishing. Most deep-water ghost sharks are known adult specimens; neonates are infrequently reported so we know very little about them. From better studied chimaera species, we know that juveniles and adults can have different dietary and habitat requirements.

Juveniles also look dissimilar to adults, having distinctive color patterns. Finding this ghost shark will help us better understand the biology and ecology of this mysterious group of deep-water fish. ”

The life of ghost sharks is a great mystery to scientists

Scientists know very little about the life of these creatures because there is a lack of fossil records and it is difficult to determine where these creatures occur. Ghost sharks inhabit the temperate oceans, most often at depths of 200 to 2600 meters. The length of adults can be up to 2 meters. Below you can see a picture of a chimera that was seen in the Sulawesi Sea as part of the NOAA Okeanos Explorer Program.

This specimen was discovered during a recent trawl survey to estimate abundance of hoki. The ocean continues to surprise with the creatures that live here, more attention needs to be paid to all marine animals in order to better protect them and ensure that their environment is not endangered. 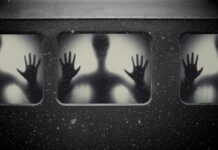