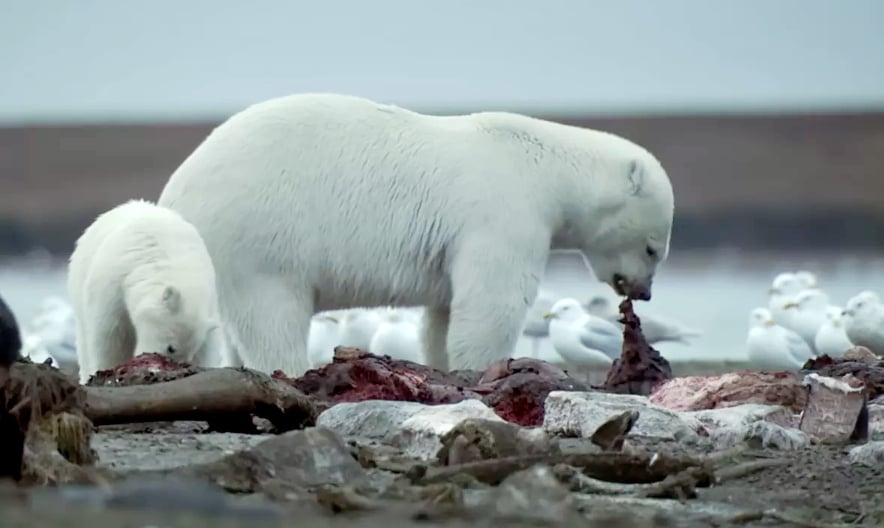 The ice provides a base for survival during the winter season to the polar bears – they look for seal airways and dens with their cubs. At the end of spring, the ice breaks, and these large mammals have to rely on land-based food sources.

In some places, during the warmer months, polar bears found an alternative food source – huge dead whale carcasses stuck in the shallows. Researchers at the University of Washington hope that whale carcasses can sustain a particular bears population, as scientific forecasts suggest that the Arctic ice sheet will disappear completely in 2040.

The researchers first determined how much whale fat and meat the polar bear population would need during the summer and then estimated the whale populations around Alaska and Chukotka. About 10% of dead whales swim ashore, and only some of them get stuck where the bears can get.

Only a Part Can Survive

There are 19 separate polar bear populations in the Arctic, and many are much worse off. The analysis showed that a hypothetical population of 1,000 polar bears would need about eight whales for the ice-free summer months. When bears eat the most in the spring, about 20 whales would keep the same thousand-headed population alive.

Marine biologist Kristin Laird, who led the research, described his findings as follows: “While in some areas whale carcasses are an important resource that can compensate polar bears for food loss caused by ice retreat, they certainly cannot be expected to resolve the situation across the Arctic and completely replace missing seals for bears. In many regions, environmental change is simply too great, and there are too few whale bodies.”

While in the Chukchi Sea, based on long-term data collection, it can be said that the number of whales required would probably be available each year; this is not the case in other areas.