Artificial sweeteners are substances that have sweet taste and are usually several times sweeter than conventional sugars, but unlike carbohydrates, artificial sweeteners contain almost no calories, which are used in the food industry to reduce the energy content of food and beverages while maintaining acceptable (sweet) taste. These foods or beverages are then referred to as ‘light’, ‘sugar free’ or ‘diet’.

E-number for aspartame is E951, it is a synthetic sweetener, which is produced synthetically from the amino acid phenylanine and from aspartic acid, and is about 200 times sweeter than sugar. Aspartame enhances aroma and increases appetite, has the ability to enhance the sweetness of other synthetic sweeteners.

Aspartame is used as a sugar substitute in over 6,000 foods worldwide. The food industry uses this artificial sweetener to produce beverages, loose drinks, teas, chewing gums, some yoghurts, some desserts, puddings, breakfast cereals, frozen creams, mayonnaise, mustard, pickled vegetables and fruits, vitamin supplements and more. It is usually not used in foods that need to be cooked or cooked.

Aspartame was first approved in 1974 and the first mention of possible brain damage (particularly with brain cancer) occurred. Since then there have been discussions about its defectiveness.

This sweetener also contains the amino acids phenylalanine, which is dangerous for people with a congenital metabolic disorder, called phenylketonuria.

It decreases the acidity of the urine, thus increasing the risk of infection.

Other side effects are dizziness, headache, rashes, and behavioral disorders in children. Sensitive individuals should avoid consuming Aspartame. 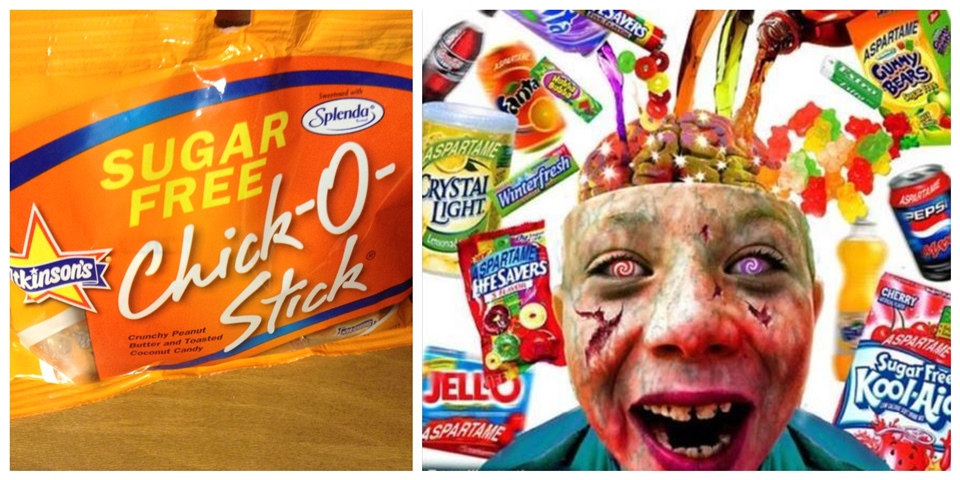 Pregnant and breastfeeding women should avoid foods containing this substance because Aspartame is broken down into methanol in the body.

Some studies in rodents report negative effects on their nervous system. In 1984, there were reports from the Arizona Department of Health that the volume of methanol in Aspartame at above-normal temperatures rises above the allowable level and becomes toxic. The FDA replied that similar levels of methanol appear naturally in fruit juices and that the risk is therefore unfounded.

In 1996, a study of rats showed an increased incidence of brain cancer.

In 2008, another study was conducted at the University of South Africa. The aim was to prove direct and indirect effects on the development of mental disorders, learning disabilities or emotional behavior. They have shown that Aspartame can disrupt the metabolism of amino acids and protein structures, the integrity of genetic material, nerve function, and hormonal balance.

The US, Canada and the EU are permitted to use aspartame in selected foods in limited quantities.

Natural Sweetener without Side Effects

If you do not want to give up a sweet taste while maintaining a healthy lifestyle, you can try stevia powder or tablets. Unlike sugar, stevia, or “sweet grass” as a sweetener, is almost non-caloric, does not contribute to tooth decay, and is also suitable for diabetics.

Substances extracted from stevia, known as steviol glycosides, approved in the European Union as a food additive under the designation E 960. You can also grow stevia in a pot and use fresh leaves to sweeten the tea.