Why did the sun smile?

The ‘smile’ we see here is made up of three coronal holes, solar fluctuations during which fast bursts of solar wind are released, NASA explained.

“Seen in ultraviolet light, these dark patches on the Sun are known as coronal holes and are regions where fast solar wind gushes out into space.”

It’s rare to get such an interesting picture. Below you can see what the entire image looks like, which was shared on Twitter.

Today, NASA’s Solar Dynamics Observatory caught the Sun "smiling." Seen in ultraviolet light, these dark patches on the Sun are known as coronal holes and are regions where fast solar wind gushes out into space. pic.twitter.com/hVRXaN7Z31

This is not the first smiley face

The Hubble telescope has already taken a large number of images that resemble various formations composed of stars. In the past, the telescope took an image that resembled a large smiley made up of stars. This image was taken by an amateur astronomer and subsequently entered into NASA’s Hidden Treasures of Hubble contest. She zoomed into a galaxy cluster that appeared to smile down on Earth, with the grin formed by the distortion of light from strong gravitational lensing. You can see the picture below. 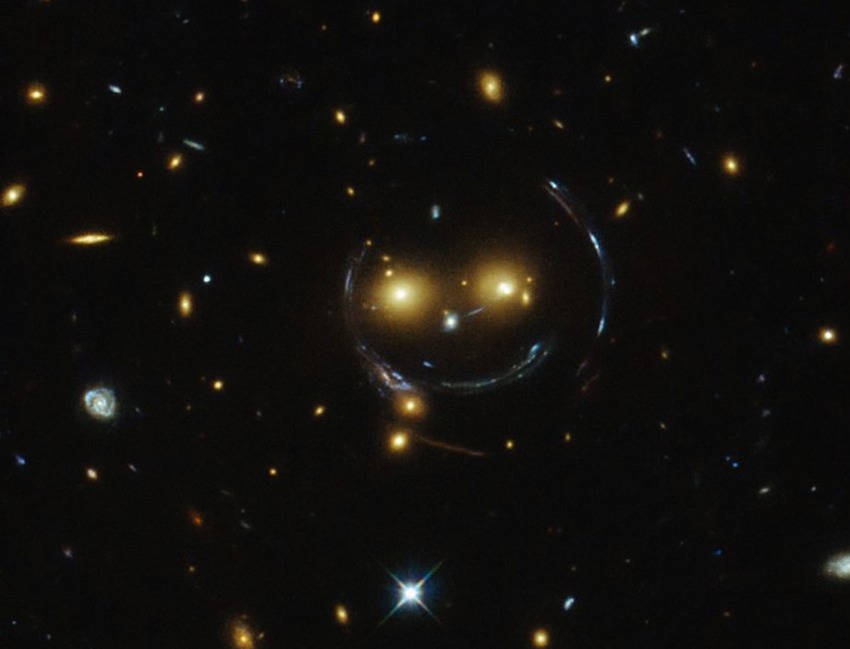 In the center of this image, taken with the NASA/ESA Hubble Space Telescope, is the galaxy cluster SDSS J1038+4849.

This is neither the first nor the last interesting picture of the “cheerful universe”. They will probably surprise us with many interesting phenomena.