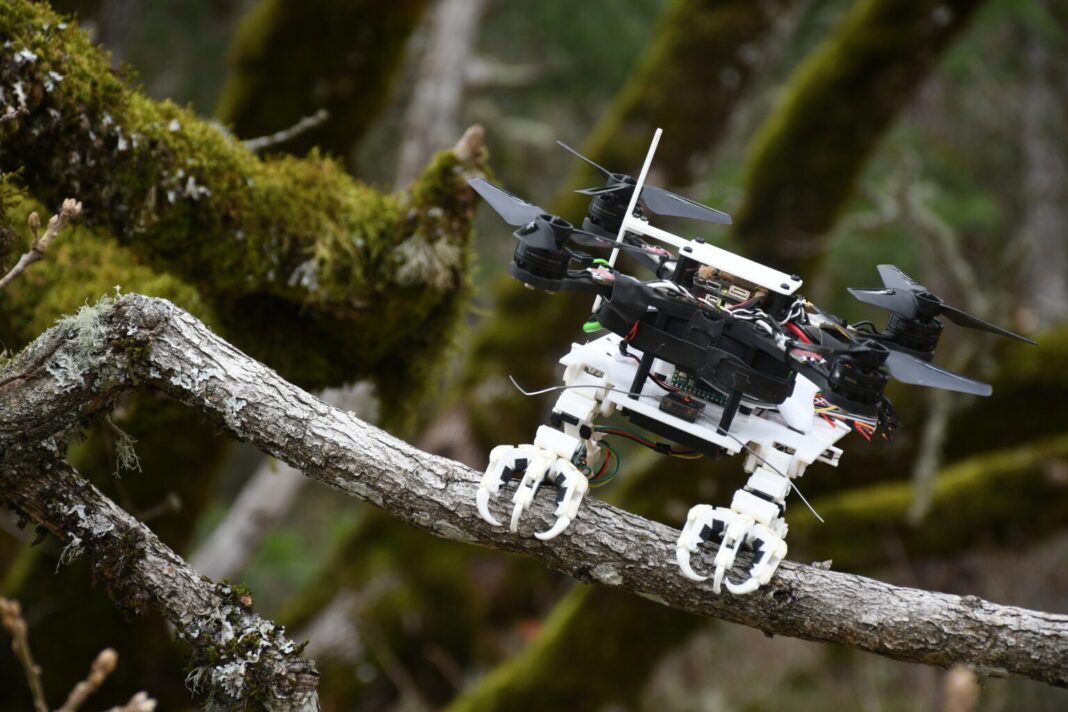 Drones are widespread throughout the world, but have limited landing options. Stanford engineers have come up with a solution that will allow drones to land in treetops. Can you imagine a drone with bird legs? Birds are the inspiration for this idea. The birds’ feet are adapted so that they can easily land on a tree, on a rock and on any other surface. A robot has been developed in Stanford that has bird’s feet and can land virtually anywhere.

The created robot has four sets of propellers and two legs. The legs of this quadcopter resemble the legs of a bird. Recently, research has been published in Science Robotics that describes in detail how the robot was developed. This robot requires minimal computing power from the control board. With the help of artificial bird legs, the way birds land can be modeled.

“We ended up designing this robot that can land like birds [do],” says David Lentink, a senior research engineer involved in the development, “and the way we got there was by first studying how birds actually accomplish landing on really complex surfaces . ”

The research team first thoroughly researched the bird’s morphology, then created an initial prototype. The team researched many professional texts and used the bodies of dead birds in order not to have to use live birds in the study. The research team tested various iterations of robotic feet. In the end, the robot managed to land on the branches of trees. The legs grip the branches firmly and the robot does not fall.

Previous versions of the robot also had legs, they could absorb shocks, but they could not stay on the branch. In the end, the inspiration from the bird kingdom helped the most, and when the robot has legs like a bird, it can land smoothly and stay on a branch. The development of bird’s feet was not easy, at first there was rubber on their surface, but it was too slippery and the robot fell from the branches. Eventually, the scientists created hook-like hooks on the robot’s legs.

“There’s this whole mechanics of being able to grasp a complex surface of which you have no idea what it looks like,” says Lentink.

The mechanism of bird’s feet is much more complicated than it may seem. The artificial bird’s legs needed to be adjusted so that the individual joints bent correctly. The feet must be able to absorb the impact and at the same time grasp the branch.

“Finally, when we got the balance right as well,” says Lentink, “we could reliably and repeatedly perch on really complex surfaces.”

The team’s work was successful. Even after 190 trials, the legs did not wear out. The robot can land on branches repeatedly and without much counting. No artificial intelligence is required to ensure landing on the branches. This research is very important because it can pave the way for conventional helicopters and drones to land on any surface in the future.

“If we put on our bird goggles,” says Lentink, “and we look at what the world looks like, we can land everywhere.”