High performance internet connection is becoming more and more important nowadays. Consumers are more connected every day and need faster speed, more stable connectivity and of course at an affordable price. The Internet of Things (IoT) is rapidly emerging and requires crucial advances in terms of internet technology.

The IoT represents the network of pretty much all devices, appliances and vehicles, but also many other everyday objects that, for now, have no internet connection. The number of IoT devices is increasing by 30% every year and it is estimated that there will be 50 billion devices connected worldwide by 2020. Therefore, the limitations of the internet technology itself need to be addressed in order to make the IoT viable. Li-Fi has been proposed as a solution to enable the IoT.

Li-Fi is a form of visible light communication system, which means that it represents the transmission of data through light. The main difference with Wi-Fi is that it uses the visible spectrum instead of radio frequencies. Indeed, data are trasmited through Light Emitting Diodes (LEDs) at very high-speed. Basically, imagine if the light bulbs of your home were replaced by LEDs, not only to illuminate a room, but also to communicate and transmit data to your phone, computer, TV and any other connected devices.

How does it work?

This technology is based on switching on and off the current of an LED at a very high rate (repetition rates between 400 and 800 THz), which is not noticeable to the human eye. Turning the LED on and off can be used to write and transmit data in binary code. To simplify, it can be compared to a a sort of advanced Morse code in which an LED off represents a 0 and an LED on represents a 1.

The technology operates through the whole visible spectrum, contrary to standard Wi-Fi being concentrated in the radio region. Then, the congestion problem of the radio-frequency bandwidth, overcrowded by our mobile devices and Wi-Fi signals could be solved by using the much larger visible spectrum instead.

Li-Fi can also be available for wavelengths that are not visible by a naked eye. That way, it would be possible to switch off the light and still be connected to an internet connection.

What are the advantages?

Li-Fi is based on visible light technology. Offices, public places and homes could use the same light source to combine lighting and data transmission. This would represent a considerable save in energy, which is really important as it is becoming crucial to make the world a greener place. LEDs are 75% more efficient than incandescent light bulbs and have a 25-time longer operational lifetime . The first step of the Li-Fi process would be to replace most of light sources by LEDs, which would engender a saving of nearly $30 billion per year, in the USA only. With today’s technology, a standard one-watt LED bulb could provide enough data speed to supply four computers.

In the USA, the annual electricity consumption for the internet represents 70 billion kWh, which is approximately $7 billion per year. Therefore, Li-Fi would enable, for example, the American population to save over $35 billion per year and considerably reduce the impact on the environment.

One of the main advantages of Li-Fi is the fact that it doesn’t go through opaque surfaces. Therefore, the internet would only be available to users within a room and it wouldn’t be possible to hack the signal outside of this space.

Li-Fi has the potential to work at much higher speed than Wi-Fi. The average Wi-Fi speed in an American home is 10 Mbps. This is usually enough to access chat and email services, most websites and stream videos. However, it becomes harder to stream HD videos or to play certain online games at this average speed. Moreover, the Wi-Fi speed is much lower in public places due to shared connections between users, meaning that each user only utilizes a fraction of the signal bandwidth.

A standard off-the-shelf commercial white LED can deliver up to 100 Mbps, which is already 10-time faster than standard Wi-Fi. Other LEDs, where the phosphor coating (giving the white color of the LED) has been replaced by other materials, have shown, outside the lab, up to 1 Gbps data rate. This is a 100-time faster than the average Wi-Fi speed. Lab-based experiments have even showed data rates up to 224 Gbps. Therefore, Li-fi could potentially solve our needs for fast internet, especially in public and shared areas.

Combining lighting and data transmission would mean one major advance: wherever there is light, there can be the internet. Light bulbs being everywhere (offices, shops, homes and so on), it would be possible to receive a high-speed internet connection almost everywhere. There would be no dead spots anymore, not even in hospitals, planes, or even underwater. 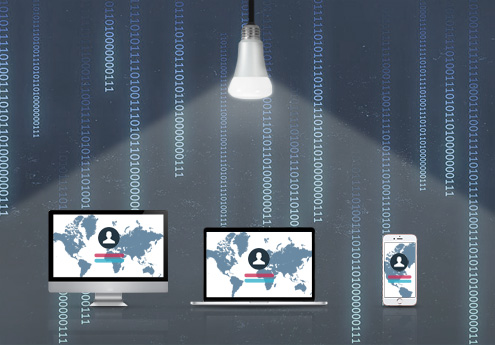 Although Li-Fi presents many advantages compared to Wi-Fi, it is still not widespread. This technology has started gaining popularity since 2011 and keeps getting increased attention. Many companies are developing this technology and it has been implemented to several industrial environments, such as in the company Velmenni in Tallinn, Estonia and several offices as for example in the University of Strathclyde, Glasgow, United Kingdom. Li-Fi might not replace Wi-Fi just now, but it might be put into action bit-by-bit to create more efficient networks. The major issue is to use current lighting systems to integrate them with the Li-Fi technology. In the future, when Li-Fi will be widely supported by populations, industries and governments, it will be easier to replace the existing lighting systems and make the technology as efficient, fast and cost-effective as it could be at its full potential.