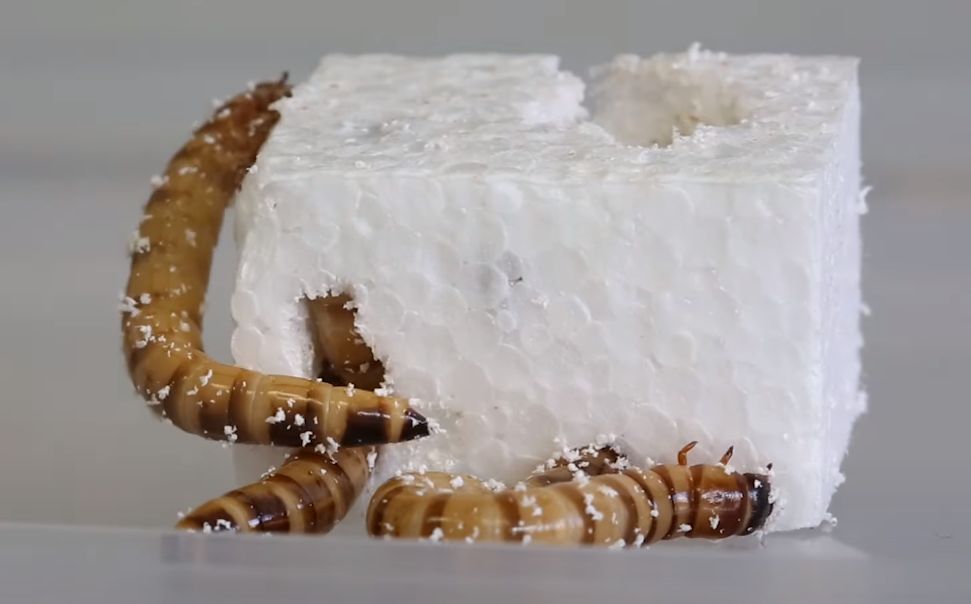 Polystyrene is one of the most problematic types of waste. It is mainly used as a packaging material and is produced in huge quantities every day. Unfortunately, it is not used repeatedly and when it ends up in nature, it takes more than 500 years to decompose. Fortunately, there is hope that could help with the recycling of this durable material. Scientists have discovered a superworm that can consume polystyrene. The findings of the study had been published in the journal Microbial Genomics.

Decomposition of polystyrene on a mass scale

This specific type of superworm is able to consume plastic waste thanks to a bacterial enzyme found in their intestines. These creatures could be able to decompose polystyrene on a mass scale. Dr. Chris Rinke and his team from the University of Queensland’s School of Chemistry and Molecular Biosciences made some remarkable observations.
These are Zophobas morio worms. During 3 weeks they were fed different types of food. Some worms got bran, some got Styrofoam and some got nothing. Common worms, Zophobas morio, were able to chew their way through polystyrene.

“We found the superworms fed a diet of just polystyrene not only survived, but even had marginal weight gains,” Dr Riske said. “This suggests the worms can derive energy from the polystyrene, most likely with the help of their gut microbes.”

Worms could be used in recycling plants

The research team used metagenomics to find several encoded enzymes that can degrade polystyrene and styrene. The long-term goal of the research team is for the worms to be used in recycling plants. First, the plastic waste is crushed and then it would be handed over to the worms to take care of its degradation.

“Superworms are like mini recycling plants, shredding the polystyrene with their mouths and then feeding it to the bacteria in their gut,” he said. “The breakdown products from this reaction can then be used by other microbes to create high-value compounds such as bioplastics,” he also added.

All over the world there are huge amounts of landfills with different types of plastic that contaminate the environment. The team hopes that this new method of ‘bio-upcycling’ will incentivize plastic waste recycling. Now the aim is to carry out further tests in order to record the ability to degrade polystyrene qualitatively.

“We can then look into how we can upscale this process to a level required for an entire recycling plant,” PhD candidate Ms. Sun (Study co-author) explained.

Plastic waste is one of the biggest problems in the world today, if it is possible to easily decompose problematic types of plastic and polystyrene, it will mean a significantly smaller burden on the environment. More attention needs to be focused on these studies to actually realize the idea and make waste recycling plants even more efficient.